We have a wide range of Archives Hub monthly features focusing on women, including:

Phyllis was sold as a child servant to the all-white Wheatley family in 1761.

Susanna Wheatley, the mistress of the Wheatley family, recognised her extraordinary flair of intuitive intelligence, fostering the intellectual development of Phillis by allowing her to learn to read and write, learn Latin and to read the Bible.

She later became the first African-American woman to publish poetry.

Read the feature, provided by the Black Cultural Archives: https://blog.archiveshub.jisc.ac.uk/2016/01/04/black-georgians-phillis-wheatley/

The Imogen Holst archive: papers of a passionate and open-minded woman musician

Imogen Holst (1907-1984) was the daughter of composer Gustav Holst, best-known for The Planets.

Holst, herself a composer, is perhaps best-known today as Benjamin Britten’s musical assistant, but she also had an exceptional, wide-ranging but lesser known career as, amongst other things, educator, conductor and music traveller.

Read the feature, provided by the Britten-Pears Foundation Archive: https://blog.archiveshub.jisc.ac.uk/2018/11/01/the-imogen-holst-archive-papers-of-a-passionate-and-open-minded-woman-musician/

In 1986 Ahmed Iqbal Ullah was murdered by a fellow pupil in the grounds of his high school in Manchester. Very quickly, Ahmed the boy disappeared behind the story of his tragic death.

The story of his family and of his mother’s bravery and fortitude similarly became obscured.

170 years ago Bedford College was opened in central London, becoming the first higher education college for women of its kind in the country.

It was the brainchild of Elizabeth Jesser Reid, who said it had been her dream since childhood to found a college for women. 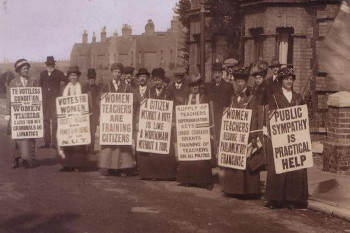 In 2010 the University of Chichester decided to establish an archive on the international women and sport movement. This decision was based on the potential donation of documents from Dr Anita White and Professor Celia Brackenridge, two individuals associated with the university who had been centrally involved in the leadership and development of the movement since 1990.

Georgiana Cavendish (née Spencer), Duchess of Devonshire (1757–1806) is well-known as a style icon and also for her personal life. However, she was also actively involved in the Whig party. Following the resignation of William Pitt in 1801, she was instrumental in getting Fox and the Prince to settle their differences, as well as reuniting the different Whig factions into a force that could be co-ordinated. Whilst Pitt returned as Prime Minister in 1804, following his death in 1806, the new government – the ‘ministry of all the talents’ – largely consisted of the coalition that Georgiana had helped to build.

Elouise was born in 1932 in Guyana, South America. She travelled to England in 1961 to join her husband Beresford Edwards. They settled in Manchester and soon became active in the struggle against inequality and racism that existed at that time. They challenged racist attitudes and campaigned for the needs of people from overseas. This developed into a lifelong fight for equality. Elouise Edwards was instrumental in celebrating Black culture, battling racism and developing vital community resources in Moss Side. She was awarded an MBE for her amazing contribution. Elouise also has an African Chieftaincy. She was nominated for her work with African people in Manchester and the honour was bestowed by the Nigerian organisation at the British Council.

As a campaigner for Women’s Suffrage, Emily is arguably most famous for her death. She joined the Women’s Social and Political Union in 1906, soon becoming involved in a long series of arrests, imprisonments and releases after force-feeding. She managed to enter and hide in the House of Commons three times between 1910 and 1911, and was the first to embark on a campaign of setting fire to pillar-boxes. On the 4th June 1913, she tried to seize the bridle of the King’s horse running at the Derby. She received head injuries and never recovered consciousness, dying on the 8th June. Her funeral was preceded by a large funeral cortege that became one of the iconic events of the campaign for Women’s Suffrage.

The North’s Forgotten Female Reformers: Women’s suffrage and fight for reform and change throughout the UK, provided by Newcastle University Special Collections and Archives.

There are many ways to locate collections about women using the Archives Hub. Searches you could try include:

For help on searching, see our tips and examples.

Jisc is offering two one-day workshops to help you increase the reach of your digital collections, optimise them for discovery and evaluate their impact.

‘Exploiting digital collections in learning, teaching and research’ will be held on Tuesday 15 November.

‘Making google work for your digital collections’ will be held on Tuesday 22 November.

If your organisation has digital collections, or plans to develop them, our workshops will help you maximize the reach of those collections online, demonstrate the impact of their usage, and help you build for future sustainability. They will equip you with the knowledge and skills to:

Anyone working in education and research, who manages, supports and/or promotes digital collections for teaching, learning and research. Those working in similar roles in libraries, archives and museums would also benefit.

Both workshops will be held at Jisc office, Brettenham House, London and will offer a mix of discussion, practical activities and post-workshop resources to support online resource discovery activities.

For more information and to book your place please visit http://www.jisc.ac.uk/advice/training/making-your-digital-collections-easier-to-discover.

Mimas works on exciting and innovative projects all the time and we wanted Hub blog readers to find out more about the SCARLET project, where Mimas staff, academics from the University of Manchester and the archive team at John Rylands University Library are exploring how Augmented Reality can bring resources held in special collections to life by surrounding original materials with digital online content.

SCARLET addresses one of the principal obstacles to the use of Special Collections in teaching and learning – the fact that students must consult rare books, manuscripts and archives within the controlled conditions of library study rooms. The material is isolated from the secondary, supporting materials and the growing mass of related digital assets. This is an alien experience for students familiar with an information-rich, connected wireless world, and is a barrier to their use of Special Collections.

The SCARLET project will provide a model that other Special Collections libraries can follow, making these resources accessible for research, teaching and learning. If you are interested in creating similar ‘apps’ and using the toolkit created by the team then please get in touch.

Blowing the dust off Special Collections

The academic year is now in full swing and JRUL Special Collections staff are busy delivering ‘close-up’ sessions and seminars for undergraduate and postgraduate students.

A close-up session typically involves a curator and an academic selecting up to a dozen items to show to a group of students. The items are generally set out on tables and everyone gathers round for a discussion. It is a real thrill for students to see Special Collections materials up close, and in some circumstances to handle the items themselves. The material might be papyri from Greco-Roman Egypt, medieval manuscripts, early printed books, eighteenth-century diaries and letters, or modern literary archives: the range of our Special Collections is vast.

From our point of view, it’s really rewarding and enlightening to work alongside enthusiastic teachers such as Guyda Armstrong, Roberta Mazza and Jerome de Groot. The ideal scenario is a close partnership between the academic and the curator. Curators know the collections well, and we can discuss with students the materiality of texts, technical aspects of books and manuscripts, the context in which texts and images were originally produced, and the afterlife of objects – the often circuitous routes by which they have ended up in the Rylands Library. Academics bring to the table their incredible subject knowledge and their pedagogical expertise. Sparks can fly, especially when students challenge what they are being told!

This week I have been involved in close-up sessions for Roberta Mazza’s ‘Egypt in the Graeco-Roman World’ third-year Classics course, and Guyda Armstrong’s ‘Beyond the Text’ course on Dante, again for third-year undergraduates. Both sessions were really enjoyable, because the students engaged deeply with the material and asked lots of questions. But the sessions also reinforced my belief that Augmented Reality will allow us to do so much more. AR will make the sessions more interactive, moving towards an enquiry-based learning model, where we set students real questions to solve, through a combination of close study of the original material, and downloading metadata, images and secondary reading, to help them interrogate and interpret the material. Already Dr Guyda Armstrong’s students have had a sneak preview of the Dante app, and I’m look forward to taking part in the first trials of the app in a real teaching session at Deansgate in a few weeks’ time.

For many years Special Collections have been seen by some as fusty and dusty. AR allows us to bring them into the age of app.

Did you know that today is International Archives Day?

For more information about this and the history of ICA, go to the Unesco Archives website.

Over the last year the Archives Hub has had over 120,000 visits from over 184 countries. The map above gives an indication of international use.

To go to the resource please see the following link: http://www.gla.ac.uk/services/archives/collections/internationalarchiveday/

If you are interested in international archives you could try the following websites and blogs:

Websites:
ArchiveGrid: A subscription site where you can find historical documents, personal papers, and family histories held in archives around the world.

European Archive: A freely available digital library of archives, with an emphasis on audio-visual materials.

MICHAEL UK: MICHAEL aims to provide simple and quick access to the digital collections of museums, libraries and archives from different European countries.

Blogs:
Archiefforum.be: An online community which aims to support students and young archivists in their studies and profession by peer help and advise. (Flemish language)

ArchivesBlogs: a US blog which is a syndicated collection of blogs by and for archivists.

The Archives Hub blog provides information and opinions about current archival issues, as well as Hub news and updates